Hello everyone,
I have a question about latin inscription used in John Wick 3 movie

Adjudicator's medallion upper inscription
ACTIONES SECUNDUM FIDEI
Secundum here is a preposition, right? Why genitive ? I though it should be accusative like actiones secundum fidem actions in accordance with trust. Correct? Staff member
You are right and the phrase is incorrect.

According to this, it was supposed to mean "action follows belief".
Vanitas vanitatum, omnia vanitas. (Eccl. 1:2)

I see. Another item from the movie is continental gold coin. EX UNITAE VIRES ? 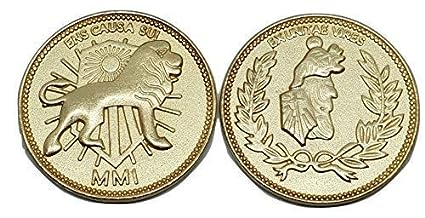 Staff member
It's ungrammatical too. It was probably intended to mean "from unity, strength".
Vanitas vanitatum, omnia vanitas. (Eccl. 1:2)

Staff member
In fact, maybe a letter just dropped out and it was meant to be ex unitate vires.
Vanitas vanitatum, omnia vanitas. (Eccl. 1:2)

Lol, I'm currently watching the film and was wondering about the same thing ... I googled the phrase and ended up here
mollia securae peragebant otia gentes.
(Ov. met. 1,100)

Since the wikipedia page Pacifica referred to a Theological dictionary and the phrase seems to be something that is found at least a few times, I thought it might not just have been a google translation fail but just an incomplete phrase that leaves a word implied ...
I found that Thomas Aquinas may have written about something like actiones secundum fidei Catholicae sententiam - actions according to the proposition of Catholic faith ... as opposed to other propositions or philosophical viewpoints, e.g. secundum Platonis sententiam.

I don't want to dive into that too deeply and read all of Thomas Aquinas now But I wonder if Terry S. has heard of it before.
mollia securae peragebant otia gentes.
(Ov. met. 1,100)
You must log in or register to reply here.
Share:
Facebook Twitter Reddit Pinterest Tumblr WhatsApp Email Link
Top