Ah, he was reviewing a performance of Cymbeline. 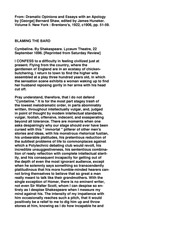 Review of a performance of William Shakespeare's play Cymbeline published in Saturday Review (the British periodical) in 1896
archive.org

Etaoin Shrdlu dixit:
There's something he's written that I probably won't be able to locate easily from what I remember, but someone else might (Pacifica certainly will if I've referred to it before, which is possible) about the idiocy of the British as evinced by the case of a man who had attempted to cut his throat. At the time suicide was a crime in UK law, so he was tried and convicted for it. And sentenced to death.

A doctor had advised that they should wait for the wound in his neck to fully heal before hanging him, but this was ignored. So the wound reopened, the drop didn't break his neck and he spent quite some time strangling to death.
Click to expand...