What are you reading?

Hemo Rusticus dixit:
None of that interests me even remotely so much as... neo-glagolitic script. Се! (ecce!)
View attachment 11450
Click to expand...

Yep, the oldest known Slavic alphabet...too bad it was forced out of the country.
​
Obsequium amicos, veritas odium parit.

Four great princes - Henry VIII of England, Francis I of France, Charles V of Spain and Suleiman the Magnificent - were born within a single decade. Each looms large in his country's history and, in this book, John Julius Norwich broadens the scope and shows how, against the rich background of the Renaissance and destruction of the Reformation, their wary obsession with one another laid the foundations for modern Europe. Individually, each man could hardly have been more different - from the scandals of Henry's six wives to Charles's monasticism - but, together, they dominated the world stage.
Namque pauci libertatem, pars magna iustos dominos volunt (Sallust)
Fere libenter homines id quod volunt credunt (Caesar - De Bello Gallico)
Aequam mementō rēbus in arduīs servāre mentem!

LCF dixit:
Can you do a longer writeup on this please. I am curious and lazy to read it
Click to expand...

@LCF, Sorry for the delay. I've been gone for a while.

Here's a site that explains the book "Trust Me, I'm Lying" pretty well.
I’m just a hobbyist & I’m not a professional translator. If you see an error in one of my Latin posts, of your charity, please check & correct it (or confirm it if it’s right, that’s nice too!)

LCF dixit:
On female chastity — There is something quite amazing and monstrous about the education of upper-class women. What could be more paradoxical? All the world is agreed that they are to be brought up as ignorant as possible of erotic matters, and that one has to imbue their souls with a profound sense of shame in such matters until the merest suggestion of such things triggers the most extreme impatience and flight. The “honor” of women really comes into play only here: what else would one not forgive them? But here they are supposed to remain ignorant even in their hearts; they are supposed to have neither eyes nor ears, nor words, nor thoughts for this—their “evil”; and mere knowledge is considered evil. And then to be hurled, as by a gruesome lightning bolt, into reality and knowledge, by marriage—precisely by the man they love and esteem most! To catch love and shame in a contradiction and to be forced to experience at the same time delight, surrender, duty, pity, terror, and who knows what else, in the face of the unexpected neighborliness of god and beast!

Thus a psychic knot has been tied that may have no equal. Even the compassionate curiosity of the wisest student of humanity is inadequate for guessing how this or that woman manages to accommodate herself to this solution of the riddle, and to the riddle of a solution, and what dreadful, far-reaching suspicions must stir in her poor, unhinged soul—and how the ultimate philosophy and skepsis of woman casts anchor at this point!

Afterward, the same deep silence as before. Often a silence directed at herself, too. She closes her eyes to herself.
Young women try hard to appear superficial and thoughtless. The most refined simulate a kind of impertinence.
Women easily experience their husbands as a question mark concerning their honor, and their children as an apology or atonement. They need children and wish for them in a way that is altogether different from that in which a man may wish for children.

In sum, one cannot be too kind about women.”
Click to expand...

Pacifica dixit:
My mother told me the story (with the caveat that she didn't know if it was true, since she'd only heard it herself) of a young woman, raised in utter ignorance of sexual matters as often happened back then, getting married and fleeing back to her mother on her wedding night, shocked and outraged, saying "You've married me to a monster! You can't even begin to imagine what horrible perverted thing he wanted to do to me!" Then the mother had to explain to her that it was in fact normal...
Click to expand...

R. Seltza dixit:
LCF & Pacifica, you both are promoted for inspiring my next book post in the "What Are You Reading" thread. Out of the literally dozens of books in my library, it's one of the more controversial books that I've read.
Click to expand... 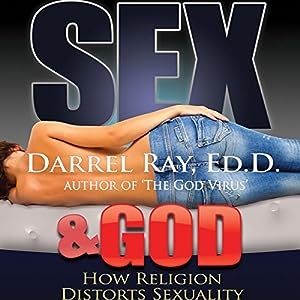 This is definitely one of the several more controversial books in my library. Nevertheless, it's a very interesting & insightful read. It goes in depth about the numerous negative, repressive, & toxic ideas & influences that religion instills, along with how it undermines one of the most pleasurable experiences that life has to offer by controlling people's sexuality through guilt & indoctrination.
I’m just a hobbyist & I’m not a professional translator. If you see an error in one of my Latin posts, of your charity, please check & correct it (or confirm it if it’s right, that’s nice too!)

Pacifica dixit:
"It is known that cases of the syndrome had already been observed during the Middle Ages, since it was described in the itinerary of Felix Fabri and the biography of Margery Kempe."

Now I want to read those works.
Click to expand...

I've finished Felix's work so now I'll start the other one: https://d.lib.rochester.edu/teams/publication/staley-the-book-of-margery-kempe

This is from the aforementioned book:

Staff member
Wow, this is a bit shocking.

I am browsing Abbott's Latin Prose Through English Idiom.

Not long finished Heinz Guderian's memoir, now back to the triumphs and woes of late 18th to early 19th century France.

A quick observation, as a rule for success both Guderian's Panzer divisions and Bonaparte's Grande Armeé corps flourished through the doctrine of movement over armour or firepower.

Probably fair to say the history of waging warfare is a competition between these three doctrines.

I’m trudging through Finnegans Wake & and Pound’s good-for-nothing Cantos. Not easy going, but I’m fed up with reading things that try to mean something.
马克思

Pacifica dixit:
Forsothe I had levar se yow be slayn than we schuld turne agen to owyr unclennesse.""
Click to expand...

Pacifica dixit:
To be honest, it was kind of tedious overall. Rather repetitive. Felix's work was far more enjoyable.
Click to expand...